Ogre Wars: Dirge of the Fated King and the Sacred Sword

From Another Eden Wiki

It was roughly three thousand years ago.
There was a decisive battle between the brutal Ogre Clan and the armies commanded by the Thunder King.
The Ogre Clan was shattered and thought to have been eradicated from this world...
This came to be known as the Ogre Wars.
At the end of the battle, the Thunder King’s legendary sword Palsifal of ancient lore was cursed by the hatred and burning rage of the Ogre Clan...transforming the ancient sword into the cursed Ogre Rancorem.
But now a new battle is about to ignite before Aldo, the one who was selected by Ogre Rancorem to bring calamity upon the world.
What fate shall come of Altena and the lost Beast King?
Where is the future in which Aldo was dragged into the vortex of time’s memory
The time to reveal the truth of the cursed sword has come.

Altena and her brother Guildna have been resurrected by the Geo Prisma - Now Aldo and the rest must find them. And something's amiss in the Dusken Lands; a battlefield that hosts no conflict should be a quiet place, but there are rumors suggesting otherwise.

Around the battlefield you will sometimes see will-o-wisp, these are the restless souls of the once fallen soldiers, if you fulfill their last wish they will clear a path or aid you otherwise.

The map is in alphabetical order, based on who you have to talk to first. The canons will clear a path in the direction they are facing. 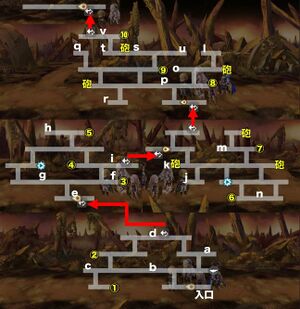 The section below has Story spoilers, you have been warned.[edit]

>Click here to reveal spoiler< Chapter 27 RecapAldo and friends reminiscent about their previous adventures and wonder if they could have been anything done to change Eden's fate, furthermore both the beast king and Altena has been brought back to life by Feinnes Geo Prisma and they decide to look for them as well. The group comes to the quick realization, as of now they have no clues to go by to do either, the Mayor interrupts telling them recently there has been a lot of awful rumors about the Ancient Battlefield, a place from thousand years ago where mankind and ogre forged war. Aldo decides that it is worth checking out and they depart with the riftbreaker. A cutscene plays from the very beginning of the game, where young Guildna wanders the moonlight forest again, this time instead of meeting the baby he meets a reflection of Feinne from the current timeline, he gets enveloped in her light and disappears .Past Guildna gets teleported to the current timeline on the Snake bone Island where he meets Altena, the two talk how they were saved by Feinnes powers and Guildna swears he will use this chance of a new life to pursue a future to shape the world for the better, not as a Beast king but as himself. Back at the riftbreaker, the crew arrives at their destination and meet Deirdre and Anabel, explaining they are also here to investigate. Further in Amy grows restless wondering why the spirits behave in such a way, Deirdre explains the spirits cannot move on to the next world until their regrets has been resolved, Deirdre is able to hear their voices even those without a form. The group reaches the end of the ancient battlefield, when suddenly Ogre Rancorem starts to go berserk forcing Aldo to cut a dimensional vortex back 3000 years into the past, the Ogre Spikes appear the ancient bastion of the ogres and with it the war when it was at the pinnacle between mankind and the ogre clan. They meet the Thunder King who was in the middle of a fight, for some reason his blade, palsifials holy blade started reacting to the Ogre Rancorem, without being able to ask further questions more Ogres appear and the group decides to fight. After having won over them, Zennon the Ogre king appears and kills the Ogre who have lost, Zennon gives them his parting words, that he will extinguish mankind and disappears. Being unable to enter the Ogre spikes and follow Zennon, the group decides to return to Unigan. The group explains to the thunder king, that he is in a different timeline and his war has ended milennials ago, though unable to completly grasp the situation at hand, the thunder king decides to trust the group. Aldo and thunder king decide to visit the royal castle, there they meet king Miglance, and the thunder king notices he is the current holder of the holy blade after conversing for a bit, they head to the Inn to discuss their next steps.

An ogre fortress dropped out of a space-time rift at the ancient battlefield! Together with it came the Thunder King of legend, Palsifal in hand! Aldo will need the magic mirror's help to make sense of this.

Aldo and the gang hear rumors about a terrifying black-winged monster, and went to Snake Bone Island to investigate. Upon arrival they meet two somewhat friendlier faces - Guildna and Altena - and set out for the beast village, Konium together.

Konium is peaceful and quiet. Aldo and the others met their old enemy Vares there, but he's no longer hostile. And now the group is off to the Beast Castle on an errand; an old lady has asked them to bring her husband, who works as the Archives Guard, back home.

With the Archives Guard reluctantly agreeing to return to Konium, and the dragon scroll in hand, Aldo's business in the castle is concluded. Now he's heading off for an audience with the Dragon God.

Aldo and the gang managed to win over the Dragon God, and departed the Snake Bowles with a new power at their disposal. But the village was vulnerable in their absence! Vares alone wasn't able to protect Altena from being abducted by Anguirus...

There is a merchant in the Konium Tavern with new weapons and armors up for trade. The Cruel Angel's weapons and armors can all be upgraded at the Nopaew Emporium using materials obtained from Snake Dream and Snake Liver Damaku (Another Dungeon) runs.

He will only accept Strange Stones, Strange Feathers, and Strange Flowers, and these can only be obtained from Snake Neck Igoma, located west of the village. There are a total of 21 Feathers, 22 Stones, and 22 Flowers, just enough to trade for all pieces of equipment.

Ensembles and Other Tales