First Knight and the Holy Sword

From Another Eden Wiki

The story of the maiden wielding a demon sword has come to an end.
Yet the cycle remains unbroken as it perpetuates without end.

There exists no beginning in an eternity with no end.
Even if they were to exist, they would remain intangible, ever out of reach...
Or so it was believed.

The world can be easily turned around.
In a world where all is twisted, what is the burden that she must shoulder once again?
This is the story of the one first known to begin this endless cycle.

Ethereal Dewdrops are rewarded from Burning Beast King's Castle when opening treasure chests as well as defeating enemies. The amount of points rewarded is as follows:

Deirdre remembers that she was summoned by the Knight Commander. Despite some hesitation, Deirdre decides to respond.

The one who saved the day was Lakhesis, an ex-knight, driven from the order. it seems that he is now secretly working to stop those very knights. 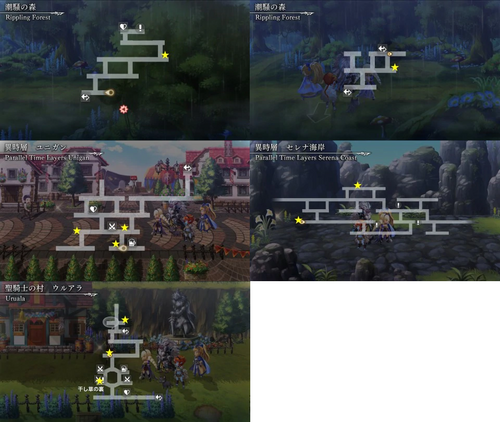 The Resistance Battle takes place along one of two routes the player chooses. Both roads start with a fight against one Tempered Patroller and end with a fight against one Tempered Raider. The upper route has six Lv50 Tempered Hounds while the lower route has three Lv80 Tempered Soldiers to fight. After the fight with the Tempered Raider but before the boss fight with the Armored Mercenary is a character marked with an exclamation who will restore the party's HP and MP. All other exclamation marks on the map are Sheltered Crabs - attempting to catch these during the Resistance Battle will waste one turn each.

Before each fight commences, the player has the option of viewing enemy details and selecting a support member for the beginning of that fight. Any of the seven possible resistance members that have been recruited may provide support. More than one resistance member can be selected per fight but each one can only be used once for the entire Resistance Battle. Each resistance member provides different supports at the start of each fight.

You will receive a reward based on how many turns you spent in battle before reaching the goal. The ultimate prize, which is a United Knight Proof Grasta, is gained by getting to the goal in 8 turns or less. Note that the battle against the Armored Mercenary Boss takes place after the resistance battle scenario is completed. You don't have to get the prize on the first attempt - you can revisit Parallel Serena Coast (Escort Lv.) in the Spacetime Rift.

Even though a truce was established the Knight Commander plans an attack on the Dusken Lands. What will become of the humans and beastfolk?

After Chapter 2, you can purchase bouquets from a girl in Uruala for 100 Git apiece. Lay them out at each grave on the north end of the map. The girl only stocks 3 at a time, but replenishes within 15 minutes. Once you've laid bouquets in front of all 11 graves, return to town and ring the bell in the center (tap the bell - it does not have a marker). The old man will reward you with this special Grasta.

At the bottom-left room of Burning Beast King's Castle 4F (Parallel Time Layer), speak to the beast inside to obtain a Chemical Base. Bring it to the cauldron room in the Beast King's Castle 3F Lodgings (Present), and you will obtain Chemistry Intellect. It is used for creating Alchemic Pinnacle.

A Second Adamantine Weapon is obtainable after doing the First Knight and the Holy Sword Side story. After finishing the Episode, investigate the second floor of Parallel Miglance Castle, and check behind the bookcase in Deirdre's Quarters. You will get another Geo Metal Lock Box, and create a second Adamantine Weapon like you did with your first.

After completing the episode, bring Deirdre to the mirror where you unlock manifest weapons. While the Demon Grandpa will initially decline a manifest battle for Deirdre, a prompt for different cutscene appears right next to the mirror, and trigger the fight for Demon Sword Verweil. After obtaining Verweil, you will need to unlock its full power like any other manifest.

There are a total of three Unified Knight Proofs for Deirdre. The first is obtained from the Resistance Battle, which can be revisited in the Spacetime Rift (choose Parallel Serena Coast). You need to finish within 8 turns to earn the Grasta.

The other two Unified Knight Proofs are obtained by trading in The Port City of Rinde at night. Speak with the man at the base of the lighthouse. You will need to exchange ten Tempered Cores and ten Rippling Mushrooms from the Berserk Tempered Hound and Celestial Mushroom respectively.

Bring Bria to the normal Serena Coast to commence her 5★ upgrade quest. Complete it at Karek Swampland. This will unlock the 5★ board, but Bria will require an Areth's Diamond Tome and 5 Chant Scripts to fully upgrade.

In Burning Beast King's Castle 3F (first accessed from 4F terrace), if you bring 3 lunchboxes to the Nopaew you'll receive Guildna's personal armor Bracelet of Despair. To find out what kind of lunchbox the Nopaew wants, you need to have Poporo in your party to translate.

The Nopaew will ask for a random food item from the Miglenia Continent in any of the three time periods. The hint always corresponds to the message you get after eating a food item. You may also be asked for a food that you have not eaten before.

At the Port City of Rinde at night, head to the upper platform and speak with the girl by the benches. She'll tell you to look for her puppet.

Ensembles and Other Tales